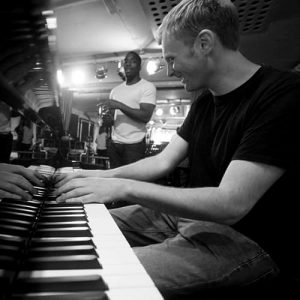 He quickly realised that empowering prisoners to create their own music through reflection had incredible effects on their well-being. Being a trained and experienced session musician, Robin could accommodate and adapt to a number of musical styles which the prisoners chose.

With funding from the Lloyds Foundation, Robin assembled a team of professional musicians to work with 10 prisoners to create and produce ‘Scrubs Sessions’ a landmark album of original music, and since then hasn’t looked back.

In 2012, Finding Rhythms was officially born and during this time, finding rhythms has worked in 25 prisons and produced over 50+ albums of original music, written and performed by prisoners.

Robin is a highly sought after Musical Director, Composer & Producer, working across a variety of fields in the music industry. He is the founder of the London Dance Orchestra and currently works as a Musical Director at The Ritz (London) and Soho House (London). He has performed and recorded on platinum records as well as composing music for various BBC productions. Robin has fostered a community of like minded industry professional musicians to deliver this amazing intervention in many prisons. Whether it’s backing vocalists with Noel Gallagher, Amy Winehouse’s Drummer, Universal signed artists, BBC sound Designer award winners, they all form part of the DNA of this charity. Robin is passionate about this work and still finds time to continue being creative director for the charity.

As Creative Director, Robin is careful to choose and train musicians who have emotional capacity to build trust with learners, creating enabling environments where prisoners are far more open and prepared to explore the benefits of learning and growth.